How to Add a Realistic Drop Shadow in Photoshop

Drop shadows are an amazing design technique you can use to add a little extra something-something to an image. Perfectly sized and positioned drop shadows are a crucial element to implementing a great-looking image.

But what is a drop shadow anyways? And most importantly, how do I get them right?

If you’ve ever tried to create a realistic-looking drop shadow in Photoshop, you know how frustrating it can be. Instead of copying and pasting premade drop shadows or using gradient overlays, why not make your own with a few easy steps?

In this tutorial, you’ll learn how to add drop shadow in photoshop alongside understanding what it really is. We’ll go through the whole process from start to finish.

What is a Drop Shadow?

Drop shadow is a visual effect that creates an artificial shadow effect on an image. This effect is mostly used in commercial photography. Drop shadow has the potential to make an image look professional.

Drop shadows are used for a variety of reasons, such as to create depth, visual interest and make an object appear to stand out from the background.

While their use may seem intuitive, the effect you get from the shadow on your image is very dependent on the color of both the shadow and the object you are creating it for. You’ll know whether it suits or not only after trying it out!

Save Time With Drop Shadow Services

Tutorial: How to Add a Realistic Drop Shadow in Photoshop

Photoshop offers manual and automatic options to create a drop shadow effect. There are two ways to make a shadow in photoshop.

In the Layer menu, there is an option called Layer Style. If you click on that, it’ll give you several options including Drop Shadow. There, you can adjust the distance of the shadow, size, opacity, noise, and many more things.

But photoshop works best when you take full control over your image. Here, we’ll describe how to add drop shadow in photoshop with detailed steps. This method is called the duplication method too, where you’ll create the shadow manually.

So, let’s start with this creative process of drop shadow photoshop!

Open the image in Photoshop by clicking > File from the menu bar. Then > Open.

At first, make a duplicate of the background layer. Right-click on Background Layer, click on Duplicate Layer, or just press Ctrl+J. 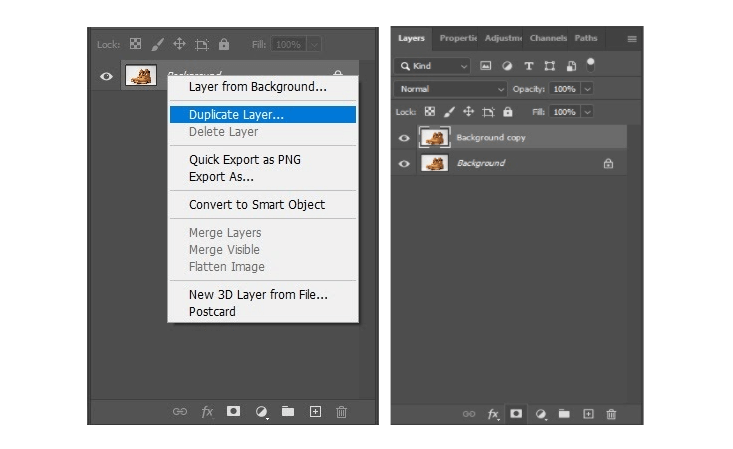 From the toolbar, pick the pen tool. It’s right above the Text tool. 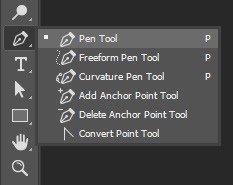 Now zoom in the image so that you can see the edges clearly and start creating a clipping path by drawing anchor points around your subject. 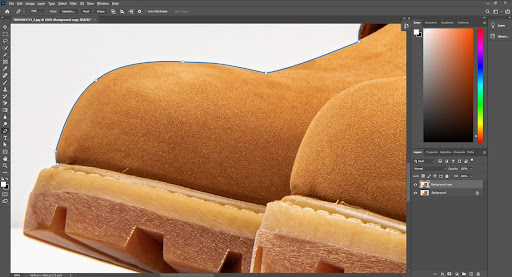 When you’re done with creating a clipping path, right-click on the image and click on Make Selection. 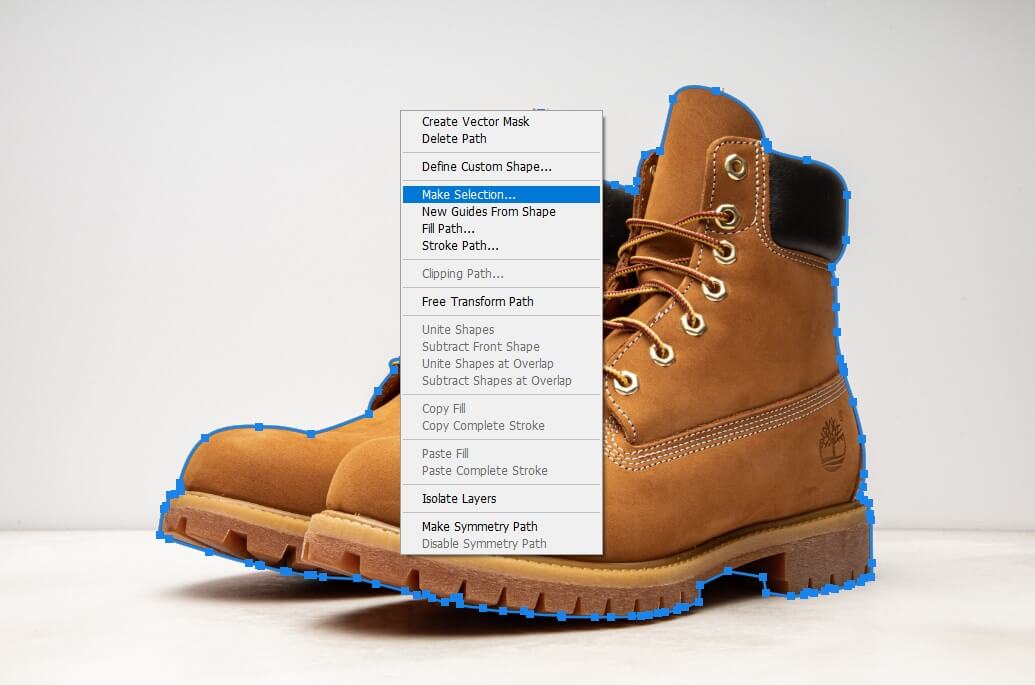 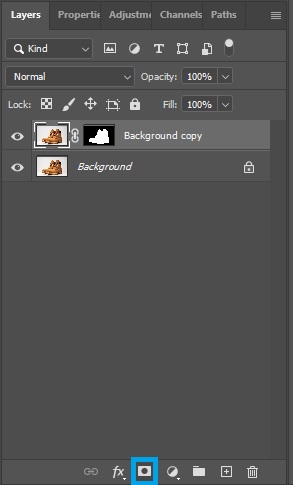 Now your image is ready to add drop shadow.

Next, add a white layer. From the Layer Panel, click on the fill or adjustment layer menu. This is right beside the mask option. From there, click on Solid Color to add a white color background. 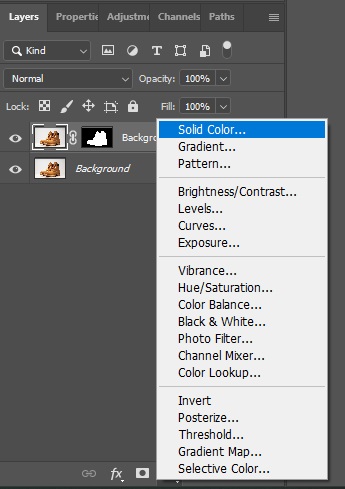 You can also add a solid color layer from the Layer Menu. Click on Layer, then click New Fill Layer and then select Solid Color. 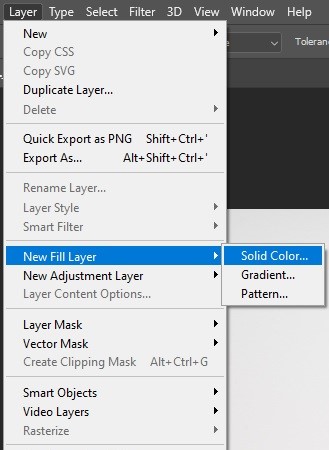 Pick the white color when the color palette pops up. 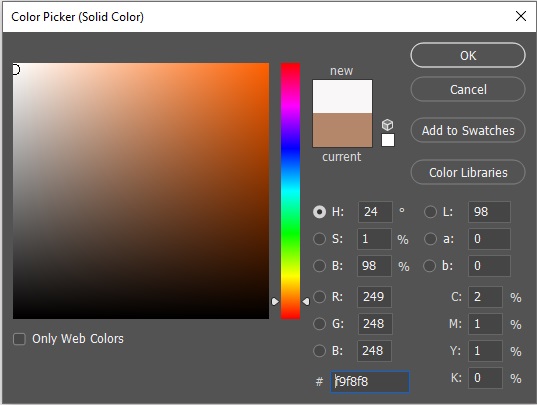 Don’t forget to place the Color Layer below Layer 0. Otherwise, your background will disappear. Click and drag down the layer. 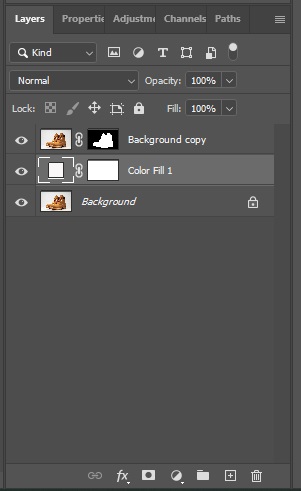 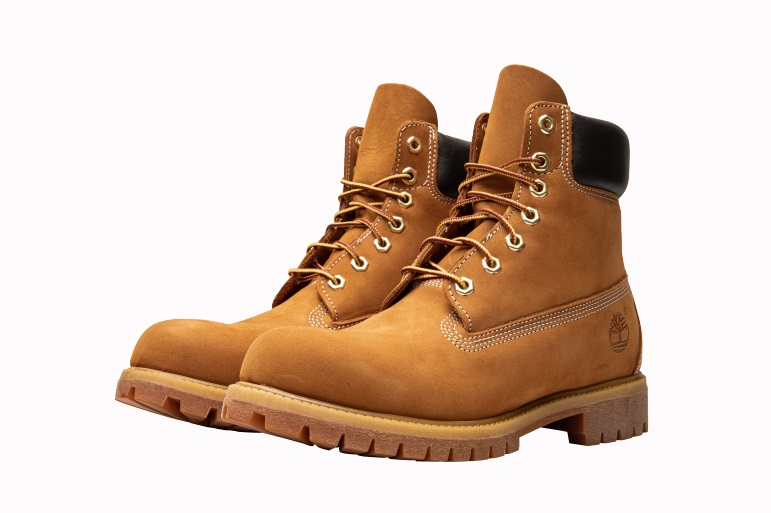 Name the ‘Background Copy’ layer as ‘Layer 0’ and make a copy of this. Right-click on the Layer and select Duplicate Layer. Or you can press Ctrl+J on the keyboard to make a copy of the layer. 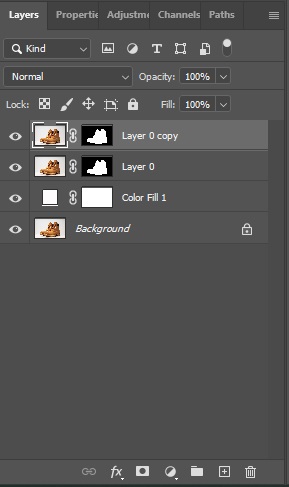 From the toolbar, set the foreground color to black. Or just press Shift+X on your keyboard.

Select the ‘Layer 0 Copy’. Now press ‘Shift+Alt+Delete’. You’ll see your layer has become black and this layer will work as a shadow. 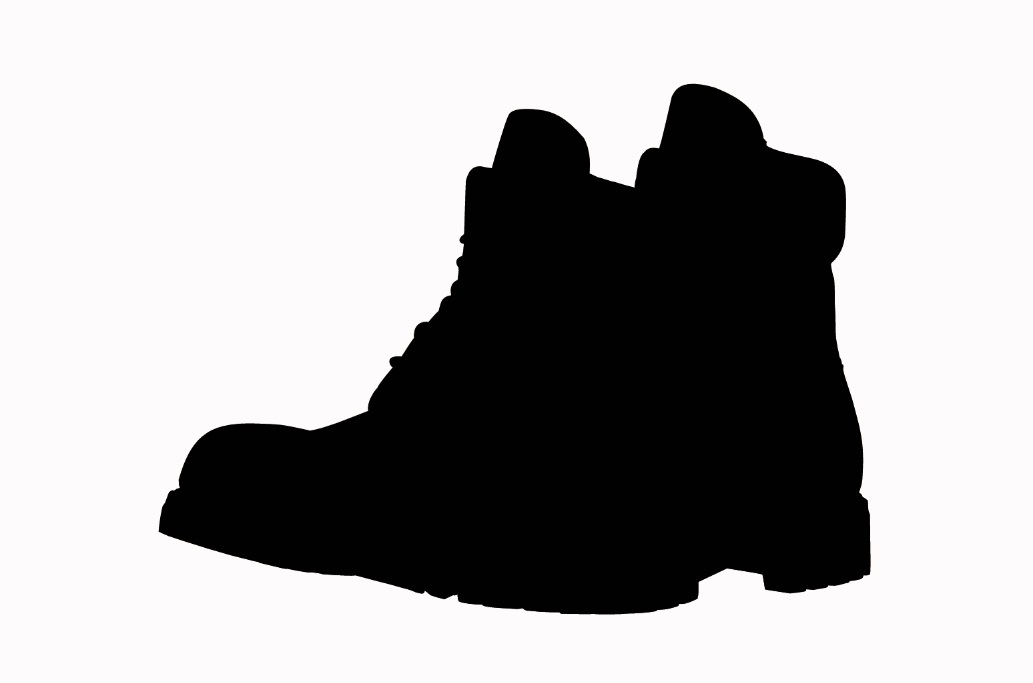 Go to Edit and select Free Transform from there. Or press Ctrl+T on your keyboard. 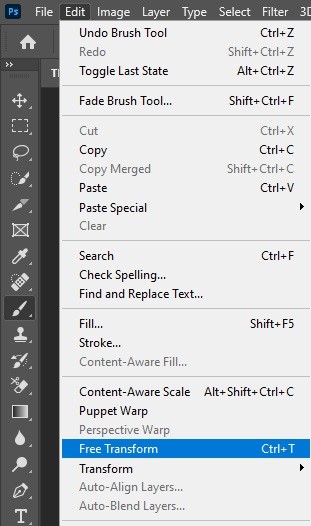 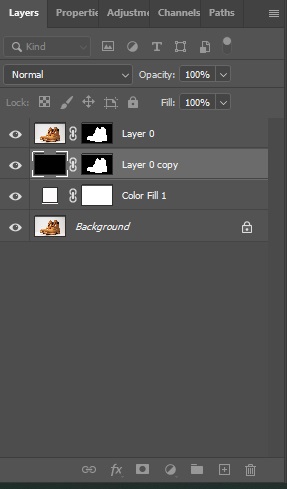 Click on the square and drag the black image down to cast a shadow. Press Enter when you’re done. 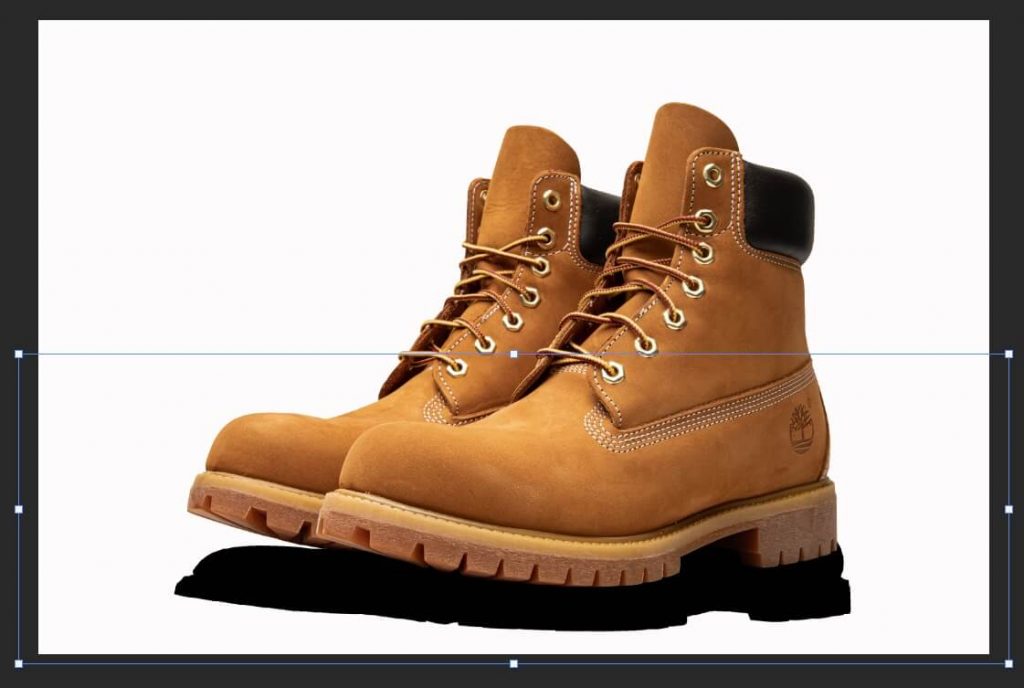 Also, while determining the placement of the shadow, define the light direction first and then place it in the right position based on that.

Go to Filter. Click on Blur and then select Motion Blur. Set the angle to 0. Adjust the distance to smooth out around the shadow. Click on Okay when it’s done. 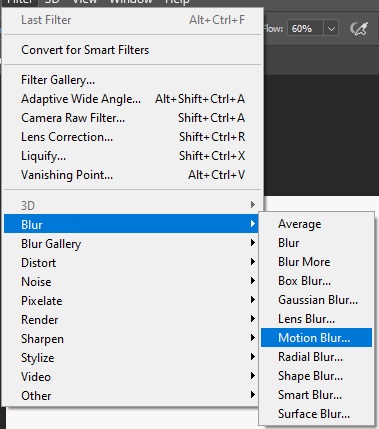 Again, go to the Filter menu. Go to Blur and select Gaussian Blur. Set the radius around 3 pix. 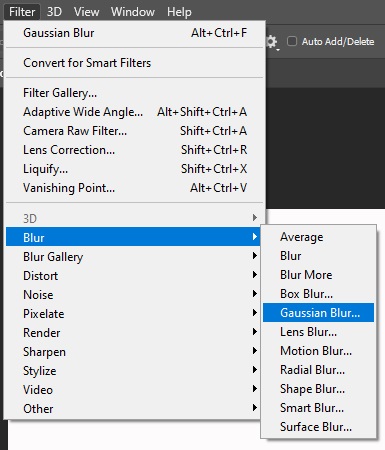 This is the final step to draw the shadow. Take the Brush Tool from the toolbar menu.

Next, you’ll have to swipe the brush to give the shadow a realistic look. This step might seem difficult but it’s not that tough if you can have a clear idea of how you want your shadow to look. 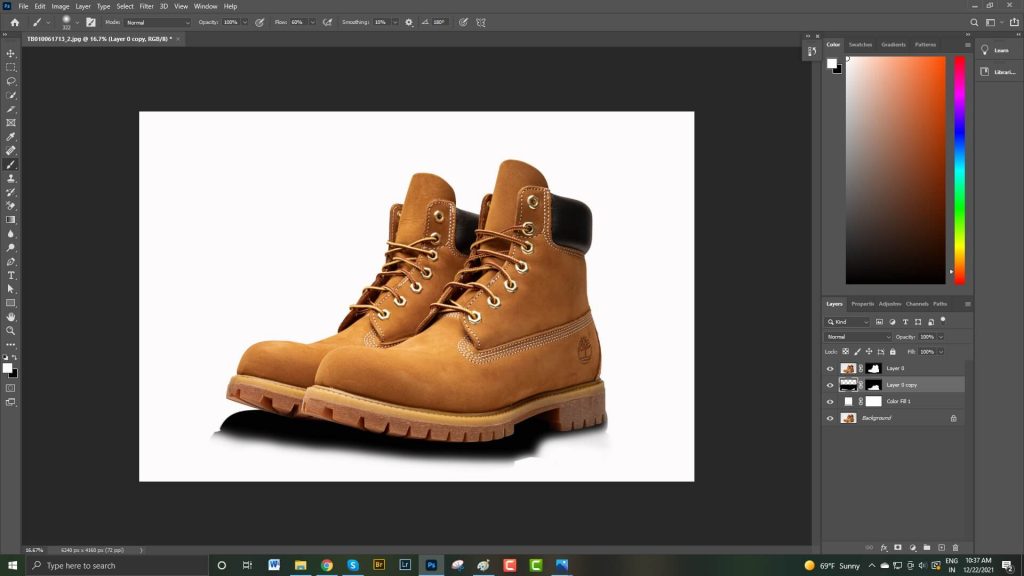 You need to practice this step several times to find your own techniques. Still, there are some tricks that will be helpful. For example, keep the brush size bigger, brush from a distance, make the shadow darker as it goes closer to the subject. 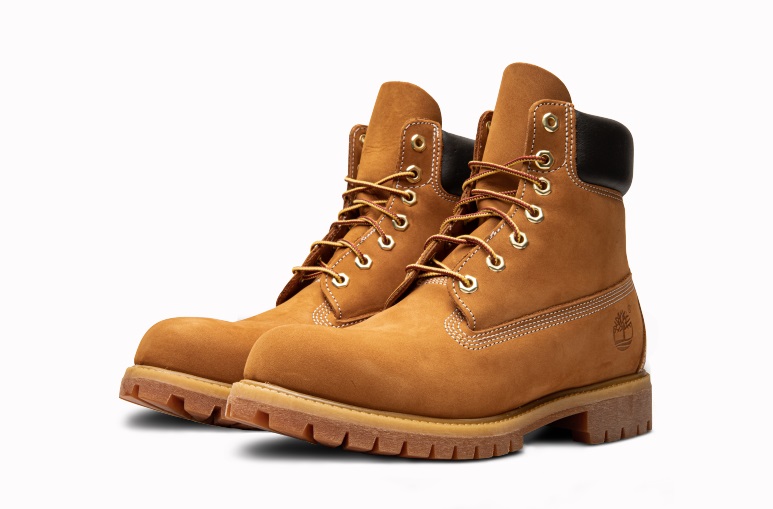 Save the image when you’re done. Go to File and click on Save As. It’s wiser to keep both JPEG and PSD files. Because with a PSD file, you can edit the image anytime you want.

When to use a drop shadow in Product Images

Drop Shadow is quite a common effect that is widely used for product photography. This can add an extra dimension to your image, but don’t use it unnecessarily either. Let’s see when you should add a drop shadow to your image –

If you’re a designer or just learning some of the basics of Photoshop, it’s important to know how to add a realistic drop shadow to your images. But you’ll be not able to bring the best output of photoshop drop shadow effect you can communicate with professionals. For that, the best solution is Offshore Clipping Path.

By adding a drop shadow, you’ll be able to give the illusion that the image is raised above the background or below where it would usually be placed.
We hope this article has helped you learn how to add drop shadow in photoshop! 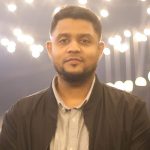 Ruzel Hasan is a genuine polymath. He has versatile skills and is adept in post-production work, graphic designing, photo editing, file formatting, and mastering various related applications and software. In addition, he has a knack for writing, so he shares his knowledge, tips, and ideas through content within his busy schedule.